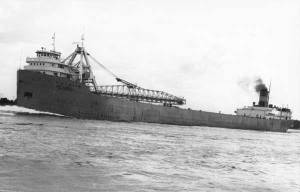 In July 1927 the Carl D. Bradley was finally fit for service in the Bradley Transportation Fleet. As one of the largest ships on the Great Lakes, the Bradley was received by the public of Rogers City, Michigan with great fanfare. At the beginning of her bright career, the Bradley transported enormous amounts of lime and cement. In fact, she hauled some record breaking loads. By 1958 the Bradley was ageing (but still the flagship of the company).

On November 17, 1958 the Bradley left Gary, Indiana bound for Manitowoc, Wisconsin where she was to undergo major repairs for the next shipping season (she had just completed her final trip for the season). But a sudden change in company plans caused the Bradley to change course for Rogers City. There was more stone to be hauled. In all there were 35 men aboard the Bradley. In command of the ship was Captain Roland Bryan. Six of the crewmen were related to one another, either by marriage or by blood. Except for a very few, most of the crew came form Rogers City, Michigan.

It didn’t take long for the weather to turn foul. Caught in the middle of a storm that was wreaking havoc across the United States, the Bradley continued on over Lake Michigan. Overall the crew wasn’t terribly upset over the storm they were in. Little did they know, this would be one for the books. At 5:35 p.m. on November 18, a loud thudding noise was heard and the ship shook. From the pilothouse Bryan and First Mate Elmer Fleming noticed the ship had cracked. From below Frank Mays and a crewman arrived on deck to see the damage for themselves. The ship’s alarm bell had been ringing and the two couldn’t help but feel and hear what had just happened. On deck, they found the Bradley had cracked near Hatch No. 10. And it was continuing to grow as the waves battered and forced it open. In the pilothouse, Bryan ordered the engines stopped while Fleming got a distress call off.

On land radio operator Ray Brunette picked up the message. In the background, Brunette had heard Bryan shouting to crewmen to get their lifejackets as the ship had broken in two and they were sinking. At the Coast Guard station in Charlevoix, Michigan Chief Boatswain Joe Etienne also received the message. But as Fleming was shouting his final mayday, the line went dead. Etienne could get no further answer, but he had received the necessary information. The Coast Guard cutter Sundew was dispatched sometime later but it would be hours before she fought her way to the site of the sinking.

Back on the Bradley efforts were being made to launch the two lifeboats in the stern section. Both attempts were unsuccessful. On the bow section there was only a life raft. As Fleming was transmitting his message the Bradley lost electricity. With this turn of events, Fleming hurried below to his room to fetch a lifejacket. Having located a lifejacket, Fleming arrived up on deck just in time for the Bradley to throw him in the water. Frank Mays was sitting in the life raft waiting to be swept away from the sinking ship when he and the raft were thrown in Lake Michigan. Mays managed to fight his way to the surface and over to the raft. Fleming also found his way to the raft where Mays pulled him aboard. The two men were tossed around on the waves as the cries and shouts of their crewmates carried towards them. Two others happened to find their way to the raft, Gary Strezelecki and Dennis Meredith. Strezelcki wanted to swim back to find his fellow crewman and brother-in-law. Realizing the hopelessness of it, Fleming was able to convince him not to do it. Meredith was lightly clad and had been rather senseless when he was pulled aboard. Not long afterwards the Bradley rose high into the air and prepared to sink beneath the waves. An explosion rocked her, throwing up an array of colors.

The explosion drew the attention of the Christian Sartori which had just seen the last moments of the Bradley. The identity of the Bradley was unknown to the Sartori. The German freighter pushed through the waves making extremely slow progress towards the wreck site. The Sundew was also having a rough go at it. Crew had tied their selves to chairs and tables as the cutter sailed along.

From their raft Fleming, Mays, Meredith and Strezelecki watched the Sartori ever so slowly near them. Fleming had earlier set off two flares and was waiting for the right time to use the last flare. Just as the Sartori came so close her searchlight alighted on them for a brief moment before the raft fell in a trough. Fleming struggled to light the flare. Unfortunately, it was too wet and completely useless. Not finding anything the Sartori moved to search another area. Many times the four men were tossed from the raft only to find their way back again. The struggle was taking its toll. Meredith, especially, was suffering. Unable to make it up on the raft and his comrades incapable of pulling him aboard,  Mays and Strezelecki held onto Meredith until he died. Throughout the night Strezelecki also began to show signs of succumbing. Fleming and Mays worked to keep him awake. As they neared day, Strezelecki swam away into the waves. Fleming and Mays had been powerless to keep him aboard.

The Sundew arrived on the scene at 10:40 p.m. Soon other vessels, as well as planes, would be combing the area looking for survivors. Later helicopters were also employed when the weather calmed some. With daylight the crew of the Sundew spotted something, a drifting raft bearing two men. The Sundew went to the raft’s aid. They found Fleming and Mays too weak to climb aboard. With the water still unsettled the transfer from raft to ship proved a little tricky but nevertheless successful. The time was 8:37 a.m. The only two survivors of the shipwreck were given the needed medical attention. The Sundew kept up her hunt but their search would turn up no living souls. Seventeen bodies were located and retrieved. At 1:14 p.m. the M/V Transontario radioed they had found a man showing signs of life. They were doing what they could for him but needed a doctor quick. A doctor was found and flown in by helicopter. But just as the doctor was preparing to be transferred to the ship the news came. Gary Strezelecki had died.

Source: Schumacher, Michael. Wreck of the Carl D.: A True Story of Loss, Survival, and Rescue at Sea.